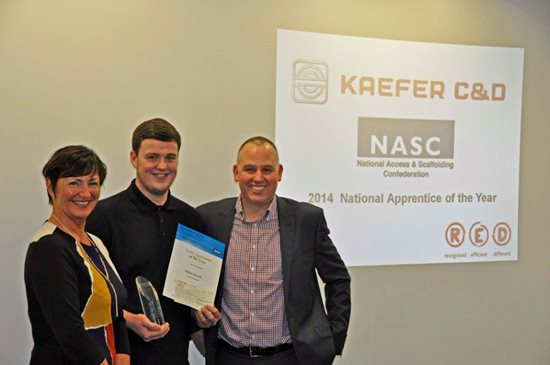 The presentation took place at the offices of his employer KAEFER C&D Ltd in Mansfield, who also received a trophy and £500 to be spent on CISRS training with an approved provider,

Josh said: “I’m very pleased to win this new award from the NASC and am very grateful to KAEFER for supporting me through the scaffolding apprentice programme. It’s been an incredibly positive experience and I would recommend the Scaffolding apprenticeship route to anyone looking to get qualified within the scaffolding sector. The facilities at the Bircham Newton training centre were very good, I enjoyed the course and the instructors were excellent.

“It was really interesting to meet up with other lads on the course from all over the country with different levels of scaffolding experience. Everyone got on well and the instructors would ask more experienced lads to work with those who were finding it harder going.

“I have enjoyed my training experience so far and have also volunteered to attend additional training on behavioral issues in order to boost my skillset and career prospects. I’m now looking forward to getting more on site experience and  progressing to advanced scaffolder training when the company feels I am ready.”

Richard Llewellyn, Midlands Area Operations Manager added: “Two years ago, KAEFER C&D decided to go down the apprenticeship route, as we became aware we had an ageing workforce and wanted to bring in some new blood. We could not be more pleased with the results, with young lads like Josh Kerwin far exceeding our expectations. As a result of the success of the apprenticeship scheme to date we have taken on a further 15 new apprenticeships across the UK.

“When it comes to training we have adopted a “dads and lads’  approach within our organisation taking on sons, younger relatives and siblings of existing employees – which has proved to be very successful  so far with 100% course completion and employee retention after training. The whole scaffolder’s apprenticeship process has been very positive for us.”

The new NASC Apprentice of the Year scheme – sponsored by both the Construction Industry Training Board (CITB) and Construction Industry Scaffolders Record Scheme (CISRS) – is aimed at individuals who are directly employed by an NASC Member company and are either part way through a formal scaffolding apprenticeship with an approved CISRS provider, or alternatively have successfully completed the apprenticeship programme in 2014.

The successful candidate needed to be conscientious, show a willingness to learn, and develop skills and go above and beyond the call of duty whilst working their way through the qualification.

Award scheme judge Diane Wood wanted to see evidence of someone who through hard work, personal development and a commitment to the industry would be viewed as a shining example to others looking to enter the scaffolding sector. She said: “Josh originally started as a yard lad in 2011. He then applied for a labourer’s job and worked for a year labouring before moving into the Scaffold Division and starting an apprenticeship. He has not only overcome his own personal challenges of working away from home while so young, but he has also helped others – in particular another team member who was finding it difficult attending college and being away from home. Joshua’s support enabled this person to continue at college.

“The testimonies stating the willingness he demonstrates in everything he does, his enthusiasm to progress but also having time to help his peers stood out in his application, but in particular the comment of his tutor ‘that he has a very positive impact on the group setting an excellent example to others and setting the standard for behaviour and respect’ made him my choice for this new award.”

Dave Mosley, NASC Director of Training and CISRS Scheme Manager said: “Congratulations to both Josh and Kaefer C&D on their achievement.  The Scaffolding sector is not always given the credit it deserves for the level of commitment that is required on the parts of both the apprentice and their employer to complete the CISRS scaffolding training programme.

“It was a real pleasure to meet Josh and present him with the first ever NASC Scaffolding Apprentice of the Year award. He is a very pleasant and approachable young man, who had obviously made a great impression on his instructor during his time at NCC East.  It’s reassuring to know that young people of this calibre are seeking a career within the scaffolding industry and that there are employers willing to help them achieve this aim.”

The competition for next year’s award should be particularly strong, thanks to the NASC President’s New Apprenticeship Challenge, which has generated 240+ new scaffolding apprenticeships since November 2013. It’s all very positive for the industry, highlighting that the scaffolding sector is leading the way in apprentice training.

At the presentation, Mr Mosley and Mrs Wood also gave a special mention to the two runners-up for the 2014 award, Dean Fry of Chris Sedgeman Scaffolding Ltd and Matt Wernham of Connect Scaffolding Ltd, both of whom will also receive a trophy in recognition of their efforts whilst working towards the achievement of their apprenticeships.

Those wishing to enter the NASC Apprentice of the Year 2015 Award should go to the CISRS section in the member’s area on the NASC website. Details will be available from September.

For details about the Apprentice of the Year Award scheme, becoming an NASC member and to find out more about TG20:13 and the NASC – the UK scaffolding industry trade body – please visit www.nasc.org.uk or email: enquiries@nasc.org.uk. And for more details on CISRS training, including a list of current providers, please visit: www.cisrs.org.uk