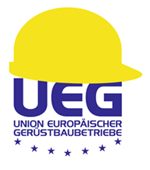 The NASC hosted 10 UEG delegates in London, including representatives from Germany, Switzerland, and Norway, at a meeting to discuss issues affecting the access and scaffolding industry across Europe. The NASC also hosted a visit by UEG delegates to the viewing platform of The Shard in the City of London, to showcase construction activity across the capital.

The UEG delegation then visited the NASC offices in Blackfriars, and were particular interested in the recently published TG20:13 good practice guidance for tube and fitting scaffolding TG20:13 – enjoying demonstrations of the TG20:13 eGuide on the new Android App. 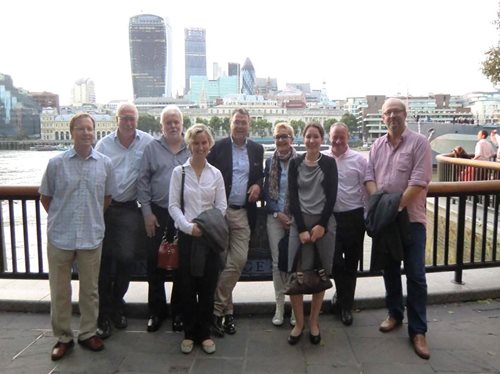 UEG delegates enjoying the sights following their meeting in London

NASC Managing Director, Robin James said: “The confederation is extremely proud to be the UK representative organisation member in the UEG. It was excellent to be able to host a meeting of this group here in London.

“Whilst still a relatively young body, the UEG is making great progress, and includes eight national representative organisations in the access and scaffolding sector in its membership. The group meets regularly with a view to sharing best practice and developing industry standards across Europe. Particular regard is paid to training and health and safety.”

Before departing, the UEG delegates enjoyed a visit to the NCC Waltham Forest training centre, where they were able to observe scaffolding training at first hand, within a specially segregated viewing area.

The visit to NCC Waltham Forest concluded with a presentation by CISRS (Construction Industry Scaffolders Record Scheme), which outlined the history and background to the development of CISRS as the industry training scheme.

To find out more about the NASC or how to become an NASC Information Member or a Full Member, please visit www.nasc.org.uk or email: enquiries@nasc.org.uk.

The Union of European Scaffolding Contractors (UEG) is the representative body for the scaffolding industry in Europe. It was founded on 25 October 2008 and its membership is comprised of national scaffolding industry organisations from Germany, UK, Netherlands, Poland, Czech Republic, Switzerland, Norway and Finland.
The aims of the UEG are: 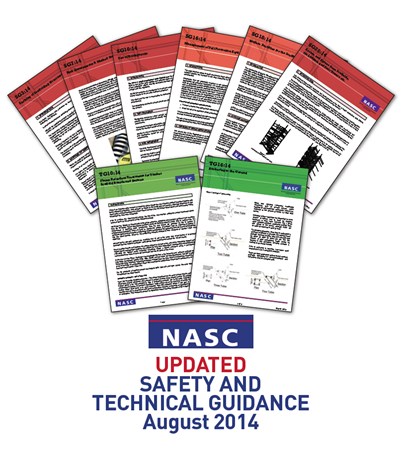 Following the successful publication and launch of TG20:13 Good Practice Guidance for Tube and Fitting Scaffolding earlier this year, the confederation has turned its attention to the review of additional NASC Safety and Technical Guidance titles in line with its five year review policy.

Updated guidance on access and egress will also be welcomed by the scaffold and access industry, as will guidance on welfare facilities and the management of fall protection equipment.
Additionally, the confederation has issued two updated Technical Guidance (TG) notes as follows:

Adrian Rooney, Chairman of the NASC Health and Safety Committee, said: “The updating and release of these guidance notes shows the effort and commitment shown by NASC member companies – and above all those who work on NASC committees and groups to produce safety guidance, training and associated literature – in setting industry standards for scaffolding.

“The NASC Health and Safety Committee works tirelessly to produce best practice guidance for the industry which is widely accepted as a major contribution towards making our industry safer for all. And, in addition to these recent releases, further updated NASC Safety and Technical guidance titles will be released in the autumn.”

NASC Managing Director, Robin James added: “The confederation is extremely grateful to the members of its working committees whose painstaking input to the review of these documents will ensure that the industry as a whole is able to benefit from the expertise of NASC member representatives.

“These updated Safety and Technical Guidance notes will be used to help raise standards and levels of safety in the scaffolding and access industry – the core aim of the NASC.”

All of the above NASC guidance is available for purchase from the NASC website publications section: www.nasc.org.uk/shop/publications-and-guidance alternatively, please email: enquiries@nasc.org.uk for assistance. 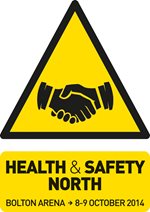 The NASC will be exhibiting at the forthcoming Health & Safety North event being held at Bolton Arena from October 8-9th 2014, on trade stand B16.

NASC will be actively promoting the work of the confederation to representatives of the construction and health and safety industries attending the event, which is set to attract over 3,000 visitors. In addition, they will be showcasing the innovative TG20:13 tube and fitting technical guidance at the show – with live demonstrations of the TG20:13 eGuide in both PC/laptop format, and in the new Android App version, which provides a mobile, digital good practice guide for tube and fitting scaffolding.

Copies of the NASC 2014 Health and Safety Report will be available to pick up from the stand, together with recent NASC press releases and examples of NASC publications. And NASC staff will be on-hand to answer questions about the confederation and its guidance to event delegates.

The Construction Industry Scaffolders Record Scheme (CISRS) will be sharing stand B16 with the NASC, demonstrating the latest information on SITS and COTS scaffolding training courses, along with information on changes to the Basic, Part One, Part Two and Advanced scaffolding courses following the launch of TG20:13 earlier this year. Copies of the CAP General Information booklet will also be available together with press releases to promote the work of the industry recognised scaffold training scheme. 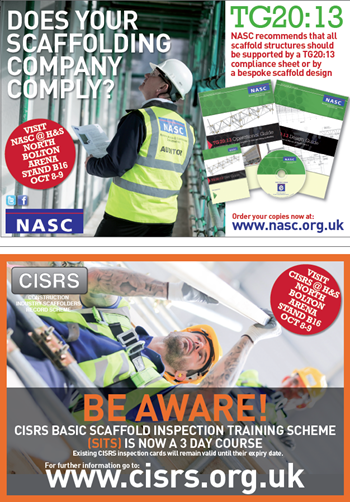 NASC MD, Robin James said: “Following on from the recent success at the S&H Expo at ExCeL in London earlier this year – where there was a huge amount of interest in what the organisation does, especially in TG20:13 – we are looking forward to promoting scaffolding best practice and showcasing recent NASC technical and safety guidance to the thousands of visitors anticipated at this northern-based event.”

CISRS Training Manager, Dave Mosley added: “There was so much interest in scaffold and access training at the S&H Expo, and we expect similarly high levels of interest in CISRS training at the Health & Safety North. We are looking forward to widening the reach of the organisation there in October, in conjunction with the NASC.”

Health & Safety Events were first launched in 2007 and have expanded rapidly with support from the industry’s leading stakeholders, such as the British Safety Council. The event organisers say: “Each event brings together the very best of the UK health & safety industry at a strategically positioned venue. Combining ease of access for the visitor with affordability and measurable ROI for the exhibitor is what makes these events so popular. “

In order to attend this free event, loaded with trade stands and packed with free seminars, interested parties should pre-register for a pass at: http://www.healthandsafetyevents.co.uk/