The NASC held its first virtual Regional Meetings this week – sharing vital information and updates with more than 100 members across the UK.

The webinars were arranged owing to the ongoing Covid-19 pandemic, which made it impossible to hold the physical, twice-yearly regional meetings as usual. 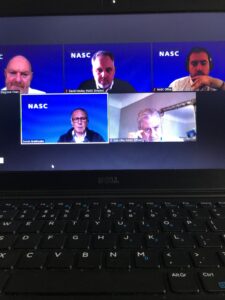 Each virtual event was led by the Regional Chair and saw short presentations delivered by representatives from the NASC’s Standing Committees.

There were also two guest speakers; Liz Bridge, of the Joint Taxation Committee, gave an update on the planned introduction of Reverse Charge VAT and Off-Payroll Working, and Terry Roberts, of CADS, gave members a run-through of the next version of the TG20 software, a work in progress, which is set for release early next year.

David Mosley, NASC Director of Training, said: “The NASC’s regional meetings provide us with an opportunity to share important industry information and discuss matters relating to the NASC, its members and the broader construction industry.

“As such, it was imperative that we found a way to replace the normal face-to-face format and the online webinar has worked very well. So far more than 120 members have logged on, with many asking questions during the various presentations, and feedback has been overwhelmingly supportive.

“It might not fully replace the existing meetings, as nothing really beats getting together in the same room, but it does give us an option for the future.”

The guest speaker presentations will be available for download via the Members’ Area shortly.

The Autumn 2020 issue of Scaffolding Matters magazine can be read online.