Latest figures taken from the Construction Industry Scaffolders Record Scheme (CISRS) database show that the 50,000 mark for CISRS card holders has been breached. This is a significant achievement and is by far the highest number of current valid cards the scheme has ever held since its inception in the late 1960’s.

Dave Francis, Access and Scaffolding Industry Training Organisation (ASITO) Chair and Internal Audit Manager for SGB (a Brand company) said: “Many congratulations to CISRS on achieving this milestone. SGB have been huge supporters of CISRS since its inception. Over the years many of our employees at all levels have attended CISRS training courses and are CISRS card holders via apprenticeships, CECOL training or the Part 1 and Part 2 qualification process. We believe it is important for our operatives to hold valid CISRS cards so we are comfortable our staff are trained to the highest industry standard and promoting safety at the forefront of all we do. CISRS is held in great regard – not only by the scaffolding sector but construction industry as a whole, and SGB are proud to have contributed to its success.”

In a climate which has seen some card schemes come under scrutiny from the wider industry, CISRS seems to be one of the few schemes which is bucking the trend. During the recent series of independent reports into card schemes and competency carried out by Pye Tait, CISRS was highly praised for its rigorous approach to qualification through the combination of formal off site training at approved training centres, on site time served experience, S/NVQ assessment, practical skills tests and Health and Safety testing.

A lot of the areas which were highlighted as lacking in other card schemes are well established within the scaffolders training and assessment programme. CISRS has always been quick to respond to changes in the industry and has strived to ensure a robust approach to sector competence. In 1996 it was one of the first schemes to include the S/NVQ Level 2 and 3 within its programme. In 1999 the newly introduced Construction Skills Certification Scheme (CSCS) approached CISRS to be one of its founder affiliate organisations. In the early 2000’s, the card renewal scheme which imposed a requirement for a Health and Safety testing on a five yearly basis was also embraced by CISRS.

The requirement for renewal did for a short period have quite a dramatic effect on card scheme numbers: For example, in 2004 there was a total of only 15,526 current card holders listed. The scheme’s ethos of quality over quantity has endured and due to this the card’s status amongst the wider industry has gone from strength to strength making it a mandatory requirement in almost all areas of the sector.

When the scheme was initially introduced 40 years ago, there still existed the opportunity to apply for a card under “grandfather rights” or “industry accreditation” based upon industry experience and an employer’s declaration. Although many of the initial cardholders obtained their CISRS status via this method, the completion of Part 1, Part 2 and Advanced training courses soon became the only established route into the CISRS scheme and it has remained that way for over 30 years since the withdrawal of Grandfather rights. 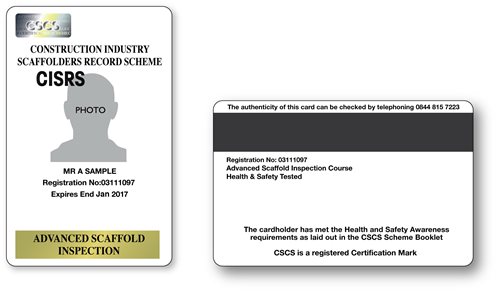 The scheme continues to move forward. The last eight years has seen the introduction of System Scaffold Product Training Scheme (SSPTS), Basic and Advanced Scaffold Inspection Training Scheme (SITS) and a mandatory one day course requirement for New Entrant Trainees and Scaffolding Labourers prior to registration CISRS Operative Training Scheme (COTS). And a full scheme review is currently underway in order to ensure any relevant industry changes are incorporated to the core scheme Part 1, Part 2 and Advanced programmes.

The new Part 1 package (which is due to be issued to approved providers by the end of December 2014) will incorporate additional training on TG20:13, Mobile Access Tower (Aluminium Tower) training for scaffolders and a Scaffold inspection module. The package will include PowerPoints, lesson plans, drawings, supporting literature, training modules etc. The standardisation working party will reconvene in early January to start work on Part 2.

David Mosley Scheme Manager said: “To reach 50,000 current card holders is a great achievement, the numbers may not seem huge when compared to some other industry schemes, but we know that our cardholders have had to work hard to achieve their CISRS status and that they are part of a select few industry recognised competency cards schemes. Well done to all involved, the card holders, their employers, the training providers and the CISRS team.“

For further details about CISRS card courses, training changes following the introduction of TG20:13, information and dates on courses available, a list of approved training providers or to find out more about CISRS, please visit www.cisrs.org.uk or email enquiries@cisrs.org.uk.