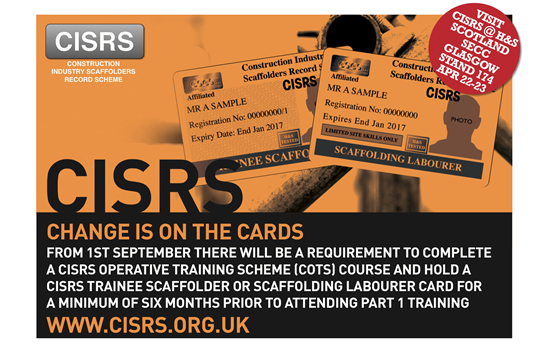 CISRS has announced that as of 1st September 2015 it will be a scheme requirement that anyone wishing to attend a CISRS Part 1 Scaffolding Training course must have held a valid CISRS Trainee Scaffolder or Labourer card for a minimum of six months.

Since the scheme began around 40 years ago, in order to be eligible to attend the Part 1 course a delegate must have had a minimum of six months on site experience as a as a Trainee Scaffolder or Labourer working under the direct supervision of a qualified scaffolder. They were not however requested to provide a copy of a valid CISRS card at this stage to demonstrate registration to the Scheme and help establish their time in the industry.

The on-going CISRS standardisation programme has helped to highlight this loophole. Around two years ago the CISRS Operative Training Scheme (COTS) course was introduced for New Entrant Trainees and Labourers which allowed a lot of the essential generic health and safety, manual handling and component recognition type training to be delivered in the initial stages of an individual’s career within the sector.  Anyone applying for a CISRS Trainee or Labourer card after June 2013 was required to complete COTS training.

The Introduction of this course allowed the standardisation group to consider reducing time spent on those modules within the Part 1 programme in favour of more up to date industry guidance and best practice e.g. TG20:13, and introduction to Scaffold inspection etc. Although it was becoming an increasingly rare occurrence some delegates were still attending Part 1 courses without having completed COTS training or holding a CISRS Labourer or Trainee card. There have been instances where a delegate will claim to have had the relevant prior on site experience however upon attending the course it is apparent that this is not the case and they will subsequently fail the course.
As such it was agreed by CISRS and the Access and Scaffolding Industry Training Organisation (ASITO) that this loophole should be should be closed.

The new rule was initially going to be introduced with immediate effect but it was felt that industry should be given a short notice period to be made aware of the changes to the scheme. This would also accommodate those who had previously booked a Part 1 course prior to the announcement, it has since been confirmed that the rule will now be implemented from 1st September 2015.

Dave Mosley CISRS Scheme Manager said: “We think that this is a sensible change of scheme rules and is basically a case of housekeeping. The standardisation programme has highlighted a few minor anomalies within current scheme criteria and these are now being addressed.”

For further details about CISRS card courses, training changes following the introduction of TG20:13, information and dates on courses available, a list of approved training providers, or to find out more about CISRS, please visit www.cisrs.org.uk or email enquiries@cisrs.org.uk.