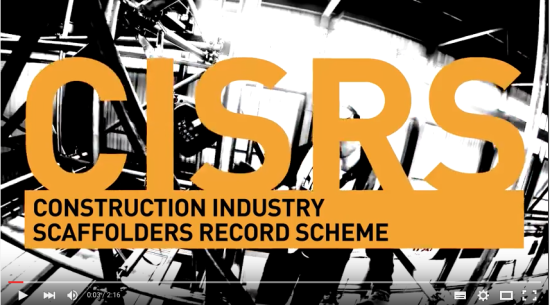 CISRS has launched a bold new promotional film aimed at attracting people into a rewarding career in scaffolding through the CISRS training scheme.

With the construction industry calling for 230,000 new recruits over the next five years and the scaffolding sector playing such a vital role in the industry, demand for trainee scaffolding operatives has never been greater. And with 50,000+ CISRS card holding scaffolders currently in the UK (and 4,000+ Overseas Scaffolder Training Scheme, OSTS, card holders), the scheme is in great shape – helping to meet the strong demand for skilled, regulated scaffolders with the right training in the construction industry.

CISRS Scheme Manager, Dave Mosley said: “Scaffolding is a great career choice – full of interesting opportunities and offering the chance to earn good money, working on different locations and projects every week. And it’s a genuine ‘career for life,’ with options to diversify into other sectors, or even start your own company later on. We have created this film to try to encourage people to kick-start a rewarding career in scaffolding – a sector which is greatly in demand.

“We’d like to thank CISRS training providers, Simian Risk Management, for granting us access to their training centre and classrooms to shoot the film and to all the scaffolding trainees in the film, for freely offering their inspiring stories about how they got into scaffolding and what the CISRS scheme and industry has done for their lives.”

MD of Royle Media, Phil Royle said: “This has been a great project to be involved with – creating a high energy, inspirational viral video to get our there for CISRS and hopefully encourage people of all ages to consider a safe, rewarding career in a booming scaffolding industry, with really good prospects and earning potential.”

The CISRS promotional film can be viewed on the CISRS website home page at www.cisrs.org.uk or via the NASC/CISRS YouTube channel here.

And for a full a list of approved training providers, further details about CISRS card courses, training changes following the introduction of SG4:15 and TG20:13, information and dates on courses available or to find out more about CISRS, please visit www.cisrs.org.uk or email enquiries@cisrs.org.uk.