The NASC is committed to breaking down the stigma surrounding mental health and promoting the importance of focusing on employee wellbeing in the workplace. The updates below show what steps the NASC is taking to achieve these goals both within the confederation and our network of members.

By Nick Bailey, ex policeman and survivor of the 2018 nerve agent poisoning in Salisbury.

It’s #MentalHealthAwarenessWeek and so I thought I’d share some thoughts that helped me get through the dark times;

The NASC is encouraging members to support the Lighthouse Club’s Help Inside the Hard Hat campaign, raising awareness of mental health issues in the construction industry. 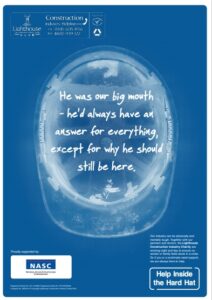 It is hoped that through this campaign a range of support and resources, including details of the charity’s 24/7 Construction Industry Helpline and app and free mental health and wellbeing training, will reach those that may need them.

A spokesman said: “If our construction workforce don’t know we’re here for them in their time of need, we can’t help them. That’s why we need the support of industry bodies such as the NASC and their members to spread the word about our Help Inside the Hard Hat campaign.”

The NASC has published a mental health signposting guide as part of its Mental Health Awareness Week activities.

The guide, which can be downloaded here, includes links to a number of useful resources. Among them is a direct link to the NASC’s dedicated mental health guidance note, SG38:19 Guidance on Mental Health & Wellbeing.

Aimed at breaking down the stigma surrounding mental health within the access and scaffolding industry, supported by the Lighthouse Club, the construction industry charity this guidance helps employers to understand mental health, and to create an action plan for employees to thrive at work.

It provides advice and contact details of other organisations who can also provide support.

SG38 can be downloaded for free via the NASC Publications page.

The fund gives NASC members the ability to claim up to £125 towards the cost of completing a mental health first aid course.

Lynn Way, NASC President, said: “The £30,000 funding pot will help pay for nearly 250 NASC member employees to complete a mental health first aid course. This will go a long way to improving awareness and understanding of mental health and wellbeing issues in the workplace and enable NASC members to better support their employees if and when they need to.

“The Head for Heights campaign has been incredibly well-received by NASC members, who are as keen to do more to support anyone in the industry who’s dealing with a mental health challenge. There’s much more to come from us on this front in the year ahead.”

The NASC has moved to provide scaffolding companies with a go-to mental health and wellbeing resource through its latest publication, SG38:19 Guidance on Mental Health Wellbeing.

Aimed at breaking down the stigma surrounding mental health within the access and scaffolding industry, this new guidance helps employers to better understand mental health, and to create an action plan for employees to thrive at work. It provides advice and contact details of other organisations who can also provide support.

SG38 was developed by the Current Affairs Committee in conjunction with the Health & Safety Committee and forms part of the NASC’s wider Head for Heights campaign, which aims to promote the importance of focusing on employee wellbeing in the workplace.

Robin James, NASC Managing Director, said: “We are pleased to have published this guidance, which we believe will play a huge role in empowering employers across the UK, enabling them to better support the mental health needs of their employees.

“This guidance provides employers with proactive steps they can take to improve wellbeing in the workplace as well as a host of useful links and services that they can signpost their employees to.”

SG38 can be downloaded for free via the NASC online shop. Hard copies may also be purchased via the same webpage.

The NASC is pleased to support Crossway Scaffolding in raising funds for Andy’s Man Club, a talking group helping young men with mental health issues throughout the UK.

Crossway Scaffolding has selected Andy’s Man Club as its chosen charity for 2019 and will hold a number of events and activities in the coming months to help fund their vital work.

These include a Ladies Fashion Show fundraiser, a 2020 calendar featuring Crossway Scaffolding operatives, and a corporate golf day. The NASC has agreed to support these efforts.

Des Moore, NASC President and CEO of TRAD Group, said: “The NASC is delighted to join Crossway Scaffolding in supporting Andy’s Man Club. This is very much in-keeping with the aims of the NASC’s Head for Heights campaign, which is focused on changing how mental health is approached and acted upon in the scaffolding industry.

“The NASC has a long tradition of raising vital funding for charitable causes, including making sizeable donations to the Lighthouse Club and Demelza Hospice Care for Children at last year’s NASC Ball & Awards.

“What’s been particularly heartening to see during my tenure as NASC President is NASC members’ willingness to also support these causes. I hope members will once again do what they can for Andy’s Man Club.”

Any members wishing to support Crossway Scaffolding’s fundraising efforts are asked to contact Sharron Kelshaw on 01422 370033.

The NASC has joined more than 900 organisations across the country in signing the Time to Change Employer Pledge.

Robin James, NASC Managing Director, signed the pledge on Monday 10 December, further sealing the confederation’s commitment to changing how we think and act about mental health in the workplace.

This commitment forms part of the NASC’s Head for Heights campaign, aimed at changing how mental health is approached and acted upon in the scaffolding industry.

The NASC was inspired to launch this campaign after statistics published earlier this year revealed the scale of mental health issues suffered by people working in the scaffolding and access and wider construction industries – and the fatal consequences they often bring.

Every year more than 400 construction workers commit suicide. Stress, anxiety and depression also account for a fifth of all work-related illnesses.

Additionally, a Construction News ‘Mind Matters’ survey revealed that 55% of respondents had experienced mental health issues and one in four workers had considered taking their life.

The Lighthouse Construction Industry Charity also revealed that demand for its range of support services was rising and that more than 18% of those it provided financial assistance to were scaffolders and roofers.

Robin James said: “Mental health is a huge issue in the scaffolding and access industry but sadly one that often goes by without notice. By signing the Time to Change Employer Pledge we’re doing our bit to raise awareness of the need to change attitudes towards mental health and wellbeing in the industry.

Des Moore, NASC President and CEO of TRAD Group, which has also signed the pledge, added: “It’s crucial that we shine a greater spotlight on mental health and wellbeing in our industry and encourage more people to speak out without stigma or prejudice if they feel like they need support.

“A broken bone is obvious. However, an individual can easily hide a mental health problem. This is a safety risk factor not just for them, but also their teammates working in a dynamic but also – as we all know – very demanding environment.”

The National Access and Scaffolding Confederation is proud to have signed the Building Mental Health Charter as part of its ongoing drive to promote positive mental health practices.

By signing the Charter, the NASC has pledged to provide awareness and understanding of the impact of poor mental ill health to our workforce as well as our 250+ members and provide assistance to signpost workers to support in their communities.

The NASC is keen to raise awareness of the need for greater mental health support and guidance in the scaffolding industry and wider construction sector and is currently developing a mental health policy guide, which will be made available to members in the New Year.

The National Access and Scaffolding Confederation has today launched its Head for Heights campaign, aimed at changing how mental health is approached and acted upon in the scaffolding industry.

The campaign will see the NASC attempt to break down the stigma surrounding mental health and wellbeing and raise awareness of the simple steps companies can take to introduce a proactive approach to tackling these issues in a sensitive manner – and the positive impact this can have.

As part of the Head for Heights initiative, the NASC will sign the Time to Change Employer Pledge, a growing social movement established to end mental health discrimination, and is urging NASC members to follow suit.

According to Time to Change, one in four people experience a mental health problem every year and half of those affected say that the associated isolation and shame is worse than the condition itself.

Robin James, NASC Managing Director, said: “We are delighted to launch our Head for Heights campaign and also sign the Time to Change Employer Pledge, demonstrating our commitment to addressing how mental health is viewed in the industry.

“There is a stigma surrounding mental health, one that is felt particularly keenly in a male-dominated industry such as scaffolding and access. That’s why we’re so keen to support people and help them find the confidence to speak up, and also support businesses looking to step up their mental health and wellbeing support.”

TRAD Group CEO and NASC President has spoken about the mental breakdown he suffered as a 26-year-old and the lessons construction can learn from experiences like his.

In an interview with Construction News, Mr Moore said: “For at least a month, there were days I just wouldn’t get out of bed and try to face the day. The only reason I got through it as I did is because my wife Debbie fully supported me and managed to get me through it.”

For a long time, only a handful of people knew about this period of his life because, in construction, you just don’t talk about this sort of thing – especially if you’re ambitious.

“I kept it to myself because I think it was always [the case] – and still is now – that people would actually perceive it as being a weakness, and a barrier to you being promoted to a senior position where you end up with a greater level of responsibility,” he explains.

“In fairness, I probably haven’t felt like that for the last 10 years.”

Mr Moore became president of the NASC in 2017 and decided the time was right to help reverse the idea that mental health is not something you talk about in construction.

“I felt it would be appropriate given that I am president of the NASC and it’s a big industry issue,” he says. “I have got to this position and I had a serious mental health incident many years ago – it hasn’t stopped me.”

“It should just be something you’re doing on a consistent basis because, ultimately, it’s just good business. That’s it.”

The NASC's SG38:19 Guidance on Mental Health and Wellbeing is available for free download.