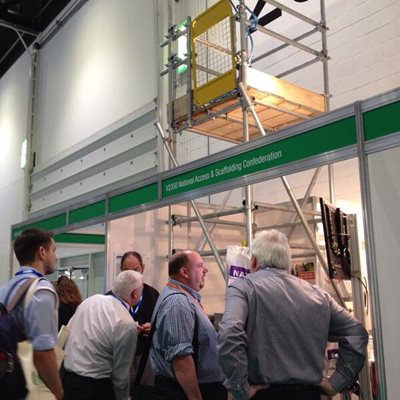 The NASC exhibited with considerable success at the Safety & Health Expo, the UK’s largest health and safety event, which took place at London’s ExCel from 17 to 19 June. The confederation took the opportunity to showcase its recently published good practice guidance for tube and fitting scaffolding TG20:13, which was received with considerable interest by hundreds of construction and health and safety industry professionals who attended the show.

The confederation also used the event, which attracted some 40,000 visitors, to launch its NASC 2014 Safety Report, which was widely circulated at the Expo, with over 300 copies being distributed from the stand.

The NASC trade stand (V2350) was clearly visible throughout the enormous venue, with a 5m free-standing scaffolding tower constructed by NASC members TRAD Scaffolding Ltd, and was visited by more than 350 people during the course of the show. Many of the visitors were given a live TG20:13 eGuide demonstration, which was very well received. The TG20:13 Android App and the new Information Membership category logo were also showcased, with keen interest in both.

There was also considerable interest in the industry scaffolding training scheme CISRS, particularly in relation to overseas training and the changes to UK training courses following the introduction of TG20:13, for example the CISRS Basic Scaffold Inspection Training Scheme (SITS), which becomes a 3-day course from July 1st 2014.

NASC social media from the Expo, via Twitter & Facebook, trended on a health and safety blog, and the organisation topped the Safety & Health Expo organiser’s own App for social media activity, seeing off hundreds of other brands and bloggers.

NASC MD, Robin James said: “The 2014 Expo has been a huge success for the organisation, spreading the NASC safe scaffolding and CISRS quality training message far and wide. The confederation has had a presence at this health and safety event in previous years, and it’s been extremely valuable. But this year has been the most important to date, with huge interest in TG20:13 and the new TG20:13 Android App, the NASC 2014 Safety Report, and the new Information Membership logo, as well as general membership and scaffolding enquiries. The organisation has clearly demonstrated to the health and safety industry what it is doing as the national trade body for access and scaffolding, and will be back in 2015 to promote its work further.”

CISRS Training Manager, Dave Mosley added: “Interest levels in CISRS were phenomenal at the 2014 Safety & Health Expo, and we were thrilled by the positive response received. The event has given CISRS the opportunity to tell industry what we are doing to improve the standards of scaffolding training in the UK, and we are already looking forward to developing our presence at the 2015 event.”

In 2014 the Safety & Health Expo has further cemented its reputation as the flagship safety event in the UK. Co-located with the IOSH conference, and offering 55+ hours of free CPD seminar content. It also offered unrivalled educational opportunities. The show also has a growing reputation internationally, with over 20% of exhibitors in 2014 coming from outside the UK, hence this year’s rebrand to ‘Safety & Health International’.”

For details about becoming an NASC member, and to find out more about the NASC, the scaffold industry guidance trade body organisation, please visit www.nasc.org.uk or email: enquiries@nasc.org.uk. And for more information on CISRS, please visit: www.cisrs.org.uk.