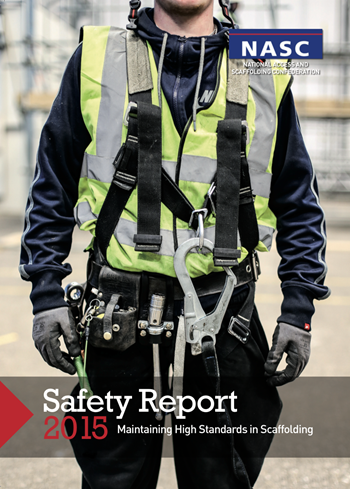 The NASC has launched its 2015 Safety Report – documenting accident statistics for all NASC full contracting member companies in 2014, covering 14,988 operatives, which constitutes a major proportion of the UK’s total scaffolding workforce.

The NASC 2015 Safety Report is being launched from the NASC & CISRS stand at the forthcoming Health and Safety Scotland event at the SECC in Glasgow, April 22-23. And it will also be circulated with Construction News in the first week of May, as well as being made available for download here. Hard copies of the report will be sent to all NASC full and information members and to construction industry contacts.

All 200+ NASC full contracting members are required to submit a completed annual accident return as a requirement of membership, and the NASC Safety Report is based on data generated by this exercise. It features:

In line with current HSE reporting procedures, the NASC 2015 Safety Report reports on seven day incidents only (as it is did in 2014). As such, the 2015 report appears to show a marked reduction in incidents, when compared with three day reporting, as detailed in the 2013 Safety Report and in previous years.

The 2015 NASC Safety Report shows another zero for fatal accidents within the membership. However, the total number of accidents reported by NASC members increased by 9% from 96 in 2013 to 105 in 2014. This corresponds to a 9% increase in the total number of member operatives, now up to 14,988.

The report also shows that there were 24 falls from height in 2014, with the highest reported fall being from 6m. Nine reported falls were from scaffolds or working platforms, of which were six from under 4m, with three falls at 4m or above, and seven falls were from ladders.

In the 41+ age groups, slips, trips and falls on the same level (16) were also the major cause of accidents. These accidents follow a very similar pattern to those reported in the 2014 NASC Safety Report.

Slips, trips and falls on the same level totalled 39 incidents during 2014, which accounted for 37% of the total number of accidents recorded. These figures show a decrease of nearly 5% on the corresponding number of incidents reported in 2013.

When the figures are analysed by grade of operative, it was identified that scaffolders suffered the largest number of accidents across all age ranges. The NASC also identified a decrease in the number of incidents related to Trainees.

Further analysis shows that the most common injuries suffered by operatives were injuries to the Feet, Toes & Ankles, followed by injuries to the Hands, Fingers & Wrists. Injuries to the Back, Leg, Hip & Groin, Arm, Neck & Shoulder, Ribs, Chest & Stomach, Face, Head and multiple Injuries are also documented.

NASC President, Kevin Ward said: “The annual report continues to demonstrate to the wider industry the continued commitment of NASC members when it comes to dealing with all matters Health and Safety related. It is therefore no surprise that continuous positive performance is evident in this latest set of statistics. These hard facts help to underpin the professional status for NASC regulated member companies.”

NASC Managing Director, Robin James added: “Once again, the annual NASC Safety Report has delivered positive numbers for the confederation membership and has provided engaging analysis, which can be used to raise standards and levels of safety in the scaffolding and access industry. We will be encouraging members to continue to work towards reducing accident figures.
“In addition to the Safety Report, the NASC Health and Safety Committee has asked members about any aspects they would like considered in the current review of its core Health and Safety guidance, SG4. Work is under-way on the update, SG4:15, set to launch in the Autumn. And new Slips Trips and Falls guidance and other new and revised safety publications will launch in 2015.”

To obtain a digital PDF copy of the NASC 2015 Safety Report please visit www.nasc.org.uk/safety_reports or contact NASC directly for a hard copy. And to obtain details about becoming an NASC member and to find out more about the NASC, the scaffolding industry trade body, visit www.nasc.org.uk or email: enquiries@nasc.org.uk.