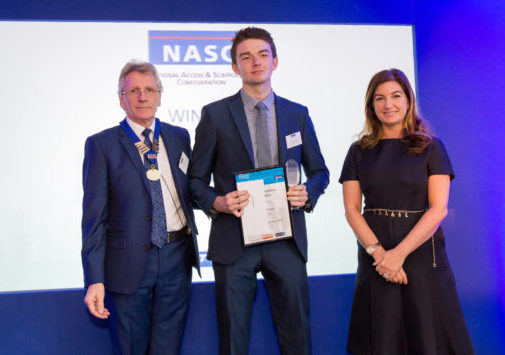 NASC 2017 Apprentice of the Year Awards presented at NASC AGM

Dave Mosley NASC Director of Training and CISRS Manager was in attendance at the NASC AGM on Friday 24 November 2017 to announce the winners in the NASC Apprentice of the Year Awards 2017.

Competition for the awards which are co-sponsored by Construction Industry Scaffolders Record Scheme (CISRS) and Construction Industry Training Board (CITB) was tough, and after reducing the submissions to a shortlist of 8, the judge for this year’s competition, Paul Gaze of CITB found it too difficult to recognise the achievements of only 2 apprentices and suggested an additional ‘highly commended’ category.

Three apprentices stood out when Paul reviewed the shortlisted submissions. All three had showed the desire to succeed and had overcome various challenges on their respective CISRS programmes.

The overall winner of this year’s award was Aidan Waldron (see above image) of Connect Scaffolding Ltd based in Bishops Stortford. He was presented with his Trophy, Certificate and cheque for £500 by Des Moore, the newly appointed NASC President, and Baroness Karren Brady CBE, business woman, football director and star of TV’s The Apprentice. His employer Connect Scaffolding also received a trophy, certificate and cheque for £500.

Paul Gaze said of Aidan “His Supervisors and Clients have provided a great deal of positive feedback on Aidan. He continually asked pertinent and sensible questions, demonstrating his awareness of carrying out the task in a safe and controlled manner with suitable regard for others that could be affected by his, or his team’s actions.”

Tiger Fedrick-Hughes of Tamworth Scaffolding Ltd was awarded the 2017 Runner Up prize which saw him and his employer receive a trophy, certificate and a cheque for £250 each. 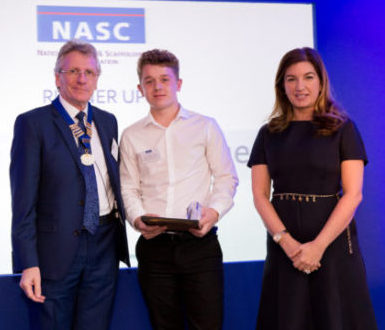 Tiger was previously working in another construction trade but felt that he was not developing his career. He since joined Tamworth Scaffolding and has excelled on his CISRS programme. His attendance and commitment are first rate, and his achievement at college is very good.

Gem Winstone, Tiger’s employer said “Tiger’s commitment to learning his trade is exemplified in that he needs to catch 2 trains and two buses to get to college and has never been late!”

The Highly Commended award went to Claudia Ferguson of Interlink Scaffold Limited (ISL) based in Birtley Tyne and Wear. 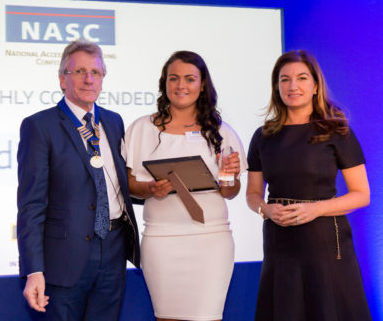 Paul Gaze felt she thoroughly deserved this recognition and stated: “Claudia is a credit to herself and her employer and has dedicated herself to learning the trade and is seen as a great addition to the team. She received a glowing report from her instructor, she has worked on a wide range of projects including the new Wear Crossing in Sunderland”

It was a highly successful day for Interlink and their workforce as the Wear Crossing job went on to win NASC 2017 Project of the Year Award which was presented by Dr Mohed Altrad founder and president of the Altrad Group who sponsored this special award.

NASC and CISRS would like to thank all of those involved in these awards including sponsors, employers and in particular the apprentices as these are the people who will take the industry into the future, well done to all.