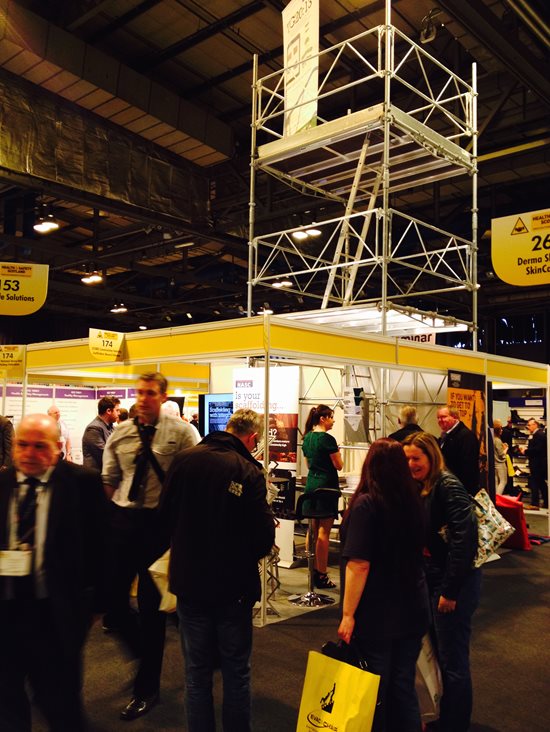 NASC and CISRS had a week of double health and safety exhibition success this week – in Glasgow and in Birmingham.
North of the border, NASC staff launched the 2015 Safety Report to a packed Health and Safety Scotland event at the SECC in Glasgow, April 22-23. And in the Midlands, Simian Risk Management Ltd represented the NASC and CISRS at the Birmingham Health, Safety and Environment Association (BHSEA) and HSE ‘Looking Back – Moving Forward’ construction seminar event at the Barclaycard Arena in Birmingham, April 22nd.

The NASC and CISRS stand was dominated by a five metre tower, erected by NASC members Turner Access using their Turner OCTO® scaffolding system, which could be seen from anywhere in the event hall.

NASC staff conducted TG20:13 eGuide demonstrations to showcase good practice guidance for tube and fitting scaffolding, and distributed copies of the NASC 2015 Safety Report, the NASC 2015 Yearbook, and associated industry publications, including promotional material for both NASC and CISRS.
In addition, NASC staff promoted the launch of revised SG4 safety guidance later this year, as well as recently updated guidance on slips, trips and falls (still the No.1 cause of accidents and injury within the scaffolding sector) and also outlined the benefits of NASC membership.
CISRS representatives discussed the content of CISRS Scaffold Inspection Training (SITS) and CISRS Operative Training (COTS) courses, and explained changes to CISRS scaffolder training courses, following the launch of TG20:13. 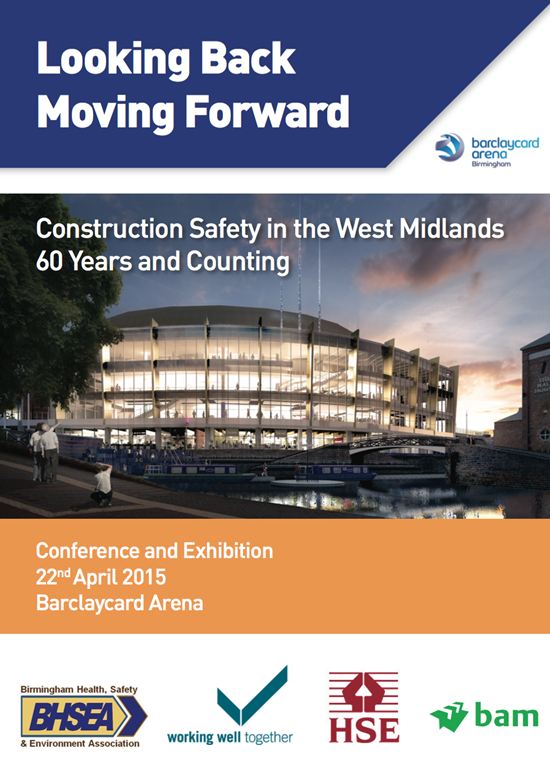 At the BHSEA ‘Looking Back – Moving Forward’ construction seminar event at the Barclaycard Arena, Birmingham, Simian Risk Management Ltd represented NASC and CISRS at an event entitled ‘Construction Safety in the West Midlands 60 Years and counting.’

This was one of a series of free partnership events run by the industry for the industry, as part of the UK-wide Working Well Together (WWT) campaign. And this particular event coincided with 60 years of the Birmingham Health, Safety and Environment Association’s Construction Section; 40 years of HSE; and 16 years of WWT campaigning – all aimed at promoting greater awareness of health and safety in construction, particularly in small and medium enterprises.

Dave Randles CMIOSH MIIRSM, Simian Risk’s Safety Director/Principal Consultant said: “The day was very well-attended and the stand generated a fair amount of interest – most of which related to the interpretation of NASC guidance. The majority of delegates with a scaffolding interest who visited the stand were aware of TG20:13 and were generally positive in their appraisal of it. I think these WWT days are definitely worthwhile; so much so, that I will be seeing that Simian make a more concerted effort to attend more of these events in future.”

Adrian Rooney, Chairman of the NASC Health and Safety Committee said: “NASC were pleased to attend and exhibit at the HSE led seminar on discussing and understanding recent updates to the CDM Regs (now 2015). The event was organised with the help of BHSEA, and marked the 60th year of their involvement in construction safety. The event was extremely well-attended, with delegates from all sectors of the construction industry and exhibitors ranging from PPE to plant suppliers right through to national trade bodies like the NASC.”

NASC Managing Director, Robin James said: “Participation in events like these is a vital part of spreading the NASC message of scaffolding industry good practice and proper training, leading to a safer, better industry. It’s positive to hear that TG20:13 technical guidance, and forthcoming health and safety guidance such as SG4:15 are so well-received by the construction and health and safety industries, along with recent publications such as the NASC 2015 Yearbook and NASC 2015 Safety Report.”