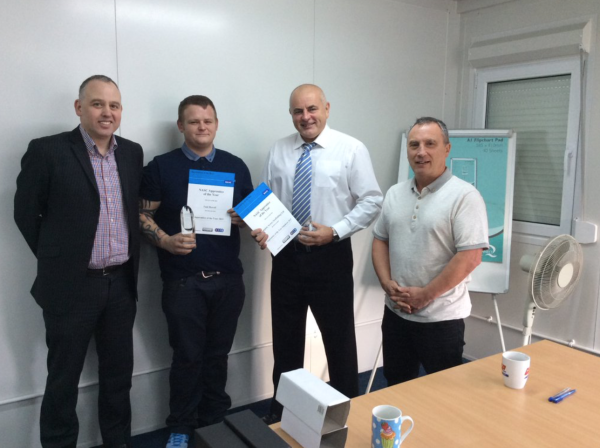 NASC Apprentice of the Year 2015, Paul Howell has recently received his winner’s trophy and a cash prize of £500 during a presentation ceremony carried out at the West Yorkshire offices of his employer Complete Access (Scaffolding) Ltd (CASL).

The presentation was made by NASC Director of Training and CISRS Scheme Manager, Dave Mosley and Apprentice of the Year Scheme Judge and Construction Industry Training Board (CITB) Scaffolding Specialist Account Co-ordinator Diane Wood.

Paul, 28 received his accolade alongside his Managing Director, Tony McDonald and Health & Safety Manager, Mick Shepherd, who also received a trophy and cash prize as employers of the NASC Apprentice of the Year award winner.

NASC were looking for ‘evidence of someone who through hard work, personal development and a commitment to the industry would be viewed as a shining example to others looking to enter the scaffolding sector.’

Paul had worked for CASL as a labourer for a period of time, but both he and his employer felt it was time for him to move forward with his career and commence a scaffolding apprenticeship. It was during this period that he showed his absolute commitment to the programme, without missing any of his practical training or work based experience – despite a chain of highly traumatic events in his life, including the death of his father and very shortly after this his partner also being diagnosed with a serious illness.

CITB’s Mrs Wood said: “I have chosen Paul as he has demonstrated immense strength of character and commitment as he faced the most difficult of personal challenges throughout the whole period of his apprenticeship, without requesting any adjustments either at work or college. Testimonies from both his employer and tutor are that he is an inspiration to everyone. Throughout this very testing period in his life he managed to offer advice, guidance and encouragement to other apprentices and continues to do this with the new apprentices at Complete Access, who look upon him as a mentor.”

CISRS Scheme Manager, Dave Mosley added: “On meeting Paul, you can see that he is a very level headed and committed young man. He has managed to gain his scaffolding qualifications under circumstances which would have understandably seen many others drop out. He thoroughly deserves this award, he is a credit to himself, his employer and a great example to the wider industry of the calibre of the people who work within scaffolding.”

Mick Shepherd of Complete Access Scaffolding who made the submission for the award on Paul’s behalf also commented: “The way Paul conducted himself during a very stressful time in his life has showed he has the mental ability to cope with anything life can throw at him. He has been an inspiration to all at Complete. Never once has he let his personal situation affect his attitude to work and his commitment to complete his training.”

In addition to the NASC’s Apprentice of the Year Award, Paul has also been awarded a CITB apprentice “Achievement Through Adversity” commendation “for his commitment to his training, in the face of difficult personal circumstances” at a CITB National Awards Ceremony in London, by TV presenter, Helen Skelton.

This is only the second year the NASC have held this Apprentice of the Year award, but the quality of the submissions has been at the highest level. And a special mention should also be given to the runner-up, Scott Curtin of Connect Scaffolding Ltd (with both Scott and his employer also receiving a trophy and a cash prize).