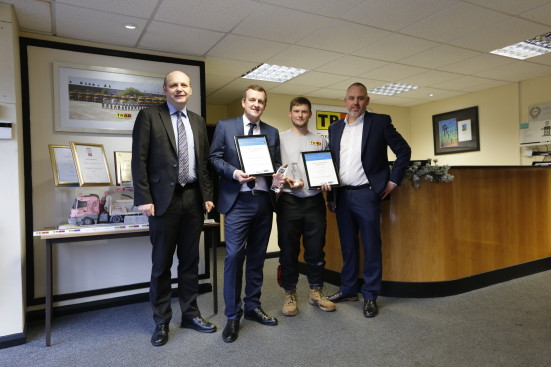 NASC Apprentice of the Year 2016 Presentation

NASC Apprentice of the Year 2016 Award winner Kier Phur of TRAD Scaffolding Co Limited has been presented with his winner’s trophy and a cash prize of £500 by CISRS Scheme Manager and NASC Director of Training, Dave Mosley and award judge and Construction Industry Training Board (CITB) Special Projects Manager, Paul Gaze.

The presentation took place at TRAD’s head office in East London, where Mr. Mosley said: “Kier is hugely committed to his job – he lives in Canterbury and gets up at 3.20am to travel to London every day. He has performed to a very high level during his training at Waltham Forest and the testimonials provided by his instructors, employer, work colleagues and contractors all state he is a great asset to TRAD.

“He is a worthy winner and demonstrates the benefits of the apprenticeship scheme to the individual, the employer and the wider industry. Congratulations to him and to TRAD Scaffolding. And we would also like to thank CITB for co-sponsorship of this award and their judging expertise.”

Accepting his 2016 NASC Apprentice of the Year Award, Kier Phur said: “Winning this award makes me believe waking up at stupid o’clock is all worth it – which in my eyes it is. From doing scaffolding since I left school, I have always said to myself ‘work hard so I can be the best I can be.’ And every year I have seen my improvement by getting awards from TRAD and phone calls telling me they are hearing good things. So, to win this award makes me feel like I have really gone above and beyond with my knowledge of scaffolding. And I am looking forward to the years to come where I hope to be running jobs and sharing what I know with others.”

In addition to Kier’s prizes, TRAD Scaffolding also received a trophy and £500 to be spent on scaffolding training with a CISRS approved training provider in 2017.

TRAD Scaffolding Co Limited’s Steve Kearney added: “TRAD are very pleased that our apprentice Kier Phur has won Apprentice of the Year, which is due not only to Kier’s ambition, endeavour and resilience, but also to the dedication of the National Construction College’s instructors, TRAD’s Lead scaffolders and Contracts Team who have ensured that Kier has been trained, mentored and coached to a very high standard.”

Selecting a winner for the coveted award, judge Paul Gaze said he was looking for “evidence of someone who through hard work, personal development and a commitment to the industry would be viewed as a shining example to others looking to enter the scaffolding sector.”

Speaking about the winner, Mr. Gaze said: “Kier was recommended for this award by three external clients, his course lecturers, his Apprenticeship Officer and also six of his colleagues. All of their feedback identified a young man who is eager to learn his trade and strive to become the best. He has a determination to make a difference but is never cocky or arrogant. Clients, project supervisors and colleagues at Trad all commented on Kier’s willingness to get involved, to work safely, ask questions to help his understanding of the process and to learn more about scaffolding. Despite still being a young man himself, his peers have often witnessed Kier supporting Labourers and less experienced Trainees. Kier is truly a worthy recipient of this award and has a bright future in this industry.”

2016 Apprentice of the Year’s runner-up was Lisa Duncan of A & J Maintenance Support Ltd in Dundee. There was also a special mention at the NASC AGM for Mike Towell of Interserve Industrial Services, who was combining his Scaffolding apprenticeship with a successful career in professional boxing. Sadly, Mike passed away following a boxing match in September 2016 before he could complete his scaffolding apprenticeship. He was nominated for the award by Lisa Duncan who was part of the same apprenticeship cohort. NASC, CISRS and CITB wish to pass on condolences to Mike’s family.

For details about The NASC Apprenticeship of the Year Award, scaffolding apprenticeships, becoming an NASC member and to find out more about the latest SG4:15 ‘Preventing Falls in Scaffolding Operations’ Safety Guidance notes, the TG20:13 full suite and the NASC – the UK scaffolding industry trade body – please visit www.nasc.org.uk or email: enquiries@nasc.org.uk.