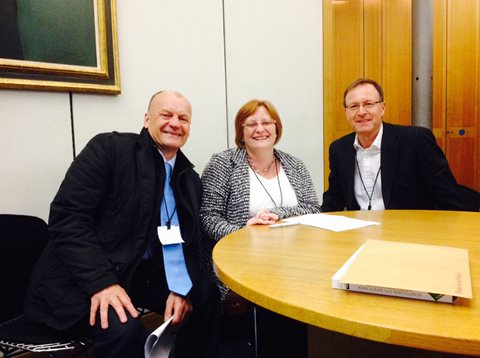 NASC were in Westminster earlier this month, with members Chris Sedgeman and Lynn Way of Chris Sedgeman Scaffolding Ltd, to meet with Nick Boles, Minister of State for Skills and Equalities – discussing the availability of training in the South West and proposals for the future of apprenticeships in the UK.

The meeting – which was attended by NASC MD, Robin James and NASC Director of Training, Dave Mosley – was brokered by Chris Sedgeman and Lynn Way, via their local Conservative MP candidate Derek Thomas (West Cornwall & the Isles of Scilly).

They had met with Mr Thomas on several occasions to discuss concerns over the lack of available training in the South West region and their fears that proposed funding models for future apprenticeships would no longer be commercially viable for the scaffolding sector – having a detrimental effect on the whole industry.

Their campaign follows a visit in May 2014 by the Chancellor, George Osborne, who had visited Chris Sedgeman’s scaffolding yard in Penzance following their scaffolding works while repairing the storm damaged mainline railway line at Dawlish.

NASC Training Manager, Dave Mosley had also previously written to Mr Boles’ predecessor, Matthew Hancock, on behalf of the scaffolding sector to express the confederation’s “serious concern” over proposals that would see a requirement for an employer contribution of around £4000 to be paid upfront prior to taking on an apprentice.

The NASC feared this would mean employers would look for alternative routes to training their workforce, away from the important apprenticeship route – which the NASC, CISRS and the scaffolding sector have supported since the late 1970s. More than 350 apprentices go through the CITB National Construction Colleges or private providers every year – more than any other industry.

Indeed, the apprenticeship drive is still of vital concern to the NASC – as current President, Kevin Ward is highlighting with his two-year campaign to get member companies to create 400+ new scaffolding apprentices into the industry.

Dave Mosley said: “This meeting was very positive. Mr Boles listened to our concerns and gave a very strong indication that some of the proposals currently being piloted in the ‘Trailblazer apprenticeship  programme’ which we opposed (such as up front employer contributions and claiming funding for training through HMRC) may not be imposed once the pilot is completed. That’s good news for the scaffolding industry and apprenticeships, which are the lifeblood of our industry.

“The NASC party left the meeting very happy with the outcome and feel that common sense has prevailed – with a softening of approach in relation to some of the previous proposals, which would have had a detrimental effect on the scaffolding industry as a whole.”

Mr Boles stated: “I do not want to introduce any measures that would dissuade companies from taking on apprentices. I appreciate the additional investment of time, money and reduction in output that taking on an apprentice entails and do not wish to add to this burden.”