Why does Ian deserve special recognition?

Lyndon SGB: Ian Hines, Regional SHEQ Manager, is the leader of our mental health team and one of our internal MHFA England instructors and the biggest advocate of raising the awareness, educating people and removing the stigma and discrimination around mental health that you could ever wish to meet.

The back story for Ian is that he went through some dark times in his younger days. Ian went to quite a low point in his life, found the strength to talk to somebody who supported him to find the relevant help and to get himself back on track.

Due to his struggles, Ian developed an interest in the subject and whilst working as a scaffolder started to train as a counsellor in his own time. 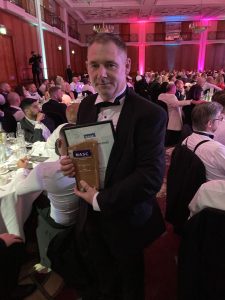 A few of his colleagues got to know that he was training as a counsellor and he was approached by a number of people and typically the conversation would start with “I’ve got this mate who” and then they would detail the issue. It quickly became apparent to Ian that they weren’t talking about a mate at all and it was them who were struggling.

Ian couldn’t understand why people were reluctant to talk about their struggles and set about starting a campaign to raise awareness and remove discrimination and stigma surrounding mental health.

Ian went to speak with management at Lyndon SGB and told them what he had experienced and asked if they would support him through some training to be able to deliver Mental Health training to employees. Lyndon SGB Management agreed, and Ian hasn’t looked back since.

Due to his knowledge and experience, Ian recognised an issue with a colleague, who at the time he did not know that well, Ian intervened just in time and got his colleague the help and support that he needed. Ian and this colleague are now the best of friends and they work together as our two MHFA instructors.

Ian has delivered MHFA training to over 150 Lyndon SGB employees and another 50 to clients and other contractors on the sites where we work, along with numerous mental health awareness training sessions.

Beyond the day job, Ian maintains his passion and drive for this subject, he has set up a not-for-profit organisation to deliver mental health first aid, youth mental health and applied suicide intervention skills training (ASIST) to communities, youth centres etc in and around the Birmingham area.

Ian also volunteers for the Samaritans and gives up his own time often at very unsociable hours to help others, indeed while we were all watching England in the final of the Euros Ian was volunteering.

Ian has also set up the ‘No Holds Barred Support Group’ where he holds regular Zoom calls, no cameras no names just a safe place to talk

Ian regularly takes part in charity events again to raise awareness and raise money for mental health charities he has previously ran a ½ marathon, completed Tough Mudder, taken part in White Collar Boxing and this year is training for a marathon.

“It’s fantastic to be able to get our mental health mission the coverage it warrants of such a big stage as the NASC Awards – in front of the best in the scaffolding business. I am truly honoured to have won this President’s Award, up against some really great people who really deserve recognition.”

“Ian Hines encompasses the above and beyond criteria of this award. The judges were moved by Ian’s determination to make a difference to people’s lives in a variety of ways including charity work, setting up a not-for-profit organisation to deliver mental health first aid training, and applied suicide intervention skills training locally. The judges were unanimous in their decision that Ian Hines is the 2021 NASC President’s Award winner.”

The NASC has a Mental Health Training Fund open at all NASC members.