NASC Project of the Year Winner 2021

Why did you select the above project for consideration in the Scaffolding Project of the Year category?

Crossway Scaffolding (Elland) Ltd: During the first lockdown of the pandemic and after a recent successful project at Hornsmill Viaduct in Hertford, we were asked to help with providing a price for our repeat client AmcoGiffen, which undertakes major contracts on the Rail Network.

We have worked for AmcoGiffen for more than ten years so they have confidence in us to deliver these types of schemes safely and on budget.

Our price would be included in their Tender to Network Rail to repair brickwork to the viaduct which was constructed between 1865 and 1872. 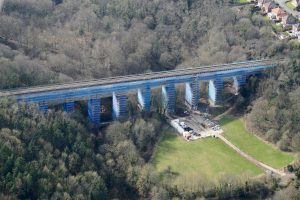 The structure, 250 metres long and 40 metres high, is Grade II listed so had to be treated with due care and attention.

Steve Fearnehough, Crossway MD, personally took control of the enquiry and had many conversations and Teams meetings with the client’s Lead Estimator and the Lead Temporary Works Co-ordinator throughout the tender process and finally came to an agreement in specifying the most efficient and cost-effective specification for the scaffolding for the project.

Please provide an overview of the scaffolding works undertaken:

Crossway: 11 no piers and abutments had fully boarded scaffold around them for access and to give support to the 1.28m deep dessa beams spanning the arches. 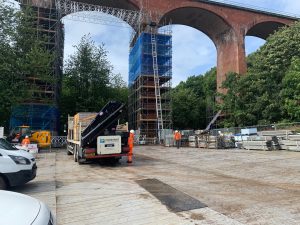 The 10 no arches were spanned 15 metres to provide a fully boarded deck below each arch. Scaffolding was then punched from the beams along the two long sides of the viaduct.

Poor ground conditions prevailed to some of the arches so we used crane mats up to one metre square to spread the loads from the scaffolding standards as sleepers or sole pads would not support the leg loads which were up to 80 kn in some of the leg clusters. A total of 110 crane mats were used.

Some piers rose from the ravine and sheer rock faces which ran through the centre of the viaduct and this problem was solved by using gallows brackets made from RMD soldiers bolted to and through the brickwork with the scaffolds springing from these.

In total, some 800 tons of equipment was used in this scaffolding package including the purchase 2265 metres or 1.40 miles of 1.28m deep beams.

How does this project best highlight your skills and expertise?

Crossway: We have over 10 years’ experience in delivering major scaffolding schemes on the rail network including a 10,000m2 crash deck over Manchester Victoria Station and many other large rail schemes. This gives our clients (major rail contractors) the confidence we can deliver these schemes.

We are preferred suppliers to these contractors and help them plan and tender for schemes as a partnership.

Continued investment is being made in the training of our employees with, for example, Personal Track Safety qualifications which involve the upkeep of medical examinations and drugs and alcohol testing to ensure safe delivery.

Two apprentices were used on this project and this has given them valuable experience. We have adopted the strict discipline required in the rail industry and rolled this out through the whole business in terms of health, safety, environment and culture in particular.

Further proof of the confidence our client has had in our abilities during this scheme is the awarding of other major rail projects to us.

Did the project present any challenges? If so, how did you overcome these challenges?

Crossway: There were many challenges to address on this project as follows;

“Crossway demonstrated competencies of an exceptional level that only a select group of scaffolding contractors would be capable of providing. Crossway overcame difficult terrain as well as technical complexities, and provided efficient solutions for the management and storage of equipment.”

The NASC has been setting the standard for scaffolding since 1945.