A dozen Armed Forces personnel expressed a significant interest in taking up a role in the scaffolding industry at the latest British Forces Resettlement Services careers fair.

Henry said: “Attendance at the event exceeded everyone’s expectations, with more than 400 Service personnel coming through the door, a remarkable number for a town without a garrison.

“The NASC and members’ stands were extremely busy. Attendees were at one of the NASC/member stands on a constant basis and it was rewarding to witness the collaboration between different members. 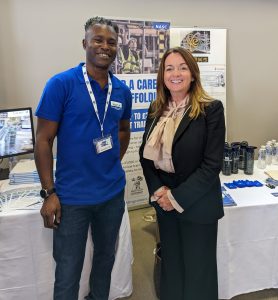 “I’m hopeful that the 12 declarations of interest I received during the event will lead into interviews. It was pleasing to see how receptive people were to working in the scaffolding industry and particularly that there was interest in numerous roles from scaffolding operatives and drivers through to estimators and designers.

“It was great to meet the Deputy Lord Lieutenant, Eileen Perry, who was effusive in her praise for the support that the NASC is showing to the Armed Forces community and particularly excited at the partnership between the NASC and BFRS over the next year.”

The NASC will sponsor the BFRS and the Military 2 Construction programme, which will focus on supporting the military community into the construction sector.

There are 7 NASC membership categories.